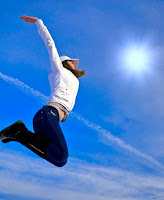 How do you usually relieve your anxiety when you are stressed out? Eating? Spending hours in front of the television? Increasing your use of cigarettes, alcohol and drugs (both illegal and legal)? With all of these you attempt to take your mind off your worries, and sometimes it seems to work in the short term.
However, these strategies – like enjoying a chocolate cake or having an extra glass of wine – have negative consequences. In the long run, some of these behaviors which became your habit in order to increase happiness will actually decrease it.

The Right Choice
There is another strategy for improving mood that not only seems to make people happier, but can be the key to long-term happiness: exercise.
When we run, swim, walk, bike, Zumba, or engage in any other form of physical exercise, we generally seem to feel less anxious and happier.
In addition to increased energy, physically active people may feel a sense of accomplishment in meeting personal fitness goals. Also, they may feel proud of the improved physical appearance that those hours in the gym have produced. And getting outdoors on a nice day – or even working out indoors around a bevy of strangers – stimulates the mind and shakes up what may be for some people an otherwise monotonous and cubicle-centric daily existence.
A Bit Of Science
Interestingly, happiness and exercise are similar in two notable ways: both are independently associated with a boost to the immune system, and also with the release of endorphins.
Both exercise and happiness lead to increased production of antibodies, which are a special type of protein produced by the immune system. People who are happy are more resistant to diseases ranging from the common cold to heart disease, while stress and anxiety tend to make people more susceptible to sickness, including diabetes and stroke. Happiness has been shown to increase antibodies by as much as 50 percent. Exercise has been shown to increase antibody production by as much as 300 percent. And since people who exercise tend to report higher levels of happiness, the exercise-induced happiness improves the immune system independent of the physiological effects of the exercise.
How To Start?
The key here is to find the exercise you really enjoy. The one where you know how good you feel afterwards. And that promise of feeling good gives you the power to get out of the house even when you feel terrible. Because you know how amazing you will feel one hour later.
There are people who go jogging, or swimming or biking, and there are many who go to an energizing Zumba Fitness class.
Never tried ZUMBA? Join one of our Zumba classes in Dublin 2, Dublin 6 or Dublin 8 and I’m sure you won’t regret!
To see times, locations and maps, CLICK HERE
Source for this article:
http://science.howstuffworks.com/life/exercise-happiness.htm
This site uses cookies to improve your user experience. Read More ACCEPT
Manage consent

This website uses cookies to improve your experience while you navigate through the website. Out of these, the cookies that are categorized as necessary are stored on your browser as they are essential for the working of basic functionalities of the website. We also use third-party cookies that help us analyze and understand how you use this website. These cookies will be stored in your browser only with your consent. You also have the option to opt-out of these cookies. But opting out of some of these cookies may affect your browsing experience.
Necessary Always Enabled
Necessary cookies are absolutely essential for the website to function properly. These cookies ensure basic functionalities and security features of the website, anonymously.
Functional
Functional cookies help to perform certain functionalities like sharing the content of the website on social media platforms, collect feedbacks, and other third-party features.
Performance
Performance cookies are used to understand and analyze the key performance indexes of the website which helps in delivering a better user experience for the visitors.
Analytics
Analytical cookies are used to understand how visitors interact with the website. These cookies help provide information on metrics the number of visitors, bounce rate, traffic source, etc.
Advertisement
Advertisement cookies are used to provide visitors with relevant ads and marketing campaigns. These cookies track visitors across websites and collect information to provide customized ads.
Others
Other uncategorized cookies are those that are being analyzed and have not been classified into a category as yet.
SAVE & ACCEPT